A corset is the essential foundation to every Phillipa Lepley wedding dress. The London designer has become recognised globally for this specific feature in her couture dresses, with a reputation of enhancing every bride’s figure, creating the most beautiful silhouette.

“A Phillipa Lepley corset is so defining,” says Phillipa Lepley. “It can mould a bride’s body and redefine her shape. We can pad out hips, raise the waist, lift the bust to create more space between the bust and waist. We can make the body any shape we want.”

The corset, hidden in the wedding dress, has the ability to take off as much as an inch at a bride’s waist, to push the bust slightly higher or make it slightly larger, or to add more ‘curves’ giving slender forms more of a defined waist.

Phillipa and her team of pattern cutters and seamstresses have fine-tuned the design and production of their corsets over the last thirty years, constantly adjusting the process resulting in unbeatable results. Each custom-made corset is specially engineered for a bride and the fabric or style of her dress.

“It took us a few years to get this corset as perfect as it is, and we’re still evolving it with little tweaks here and there. The key difference between our corsets and others is that we can place ours under very fluid fabrics and we can adjust the length of the corsets, reshaping, remoulding the body how we want it,” says Phillipa.

While many wedding dresses from other designers have corsets that finish at the waist, a Phillipa Lepley corset goes lower, flattening the tummy and avoiding cutting into the hips.

Every bespoke corset is a work of art. Although it may seem like a simple concept, it is the most complex and time-consuming part of the creation of a Phillipa Lepley dress. Meticulously placed boning inside the corset gives it the structure it needs to enhance a bride’s figure.

Phillipa says: “We use bones all the way up and down the corset but they are very specifically placed for each bride and each style of dress. The bones need to be as thin as possible at the bottom of the corset so you can’t see them through the dress. As a result they can sit over even the thinnest silk crepe.”

To create a corset, the bridal fittings team first measure the bride. The right amount of bust padding is identified and used from the start, which will be inserted into the corset so she will not need to wear a bra.

The pattern cutter in the bridal atelier then creates a paper pattern of the bride’s body and the seamstresses sew up a mock up (calico toile) of the corset in a basic fabric. Through two calico toile fittings, the corset is tweaked by the millimetre, to create an exact mould of the shape that the bride would like her torso to be. 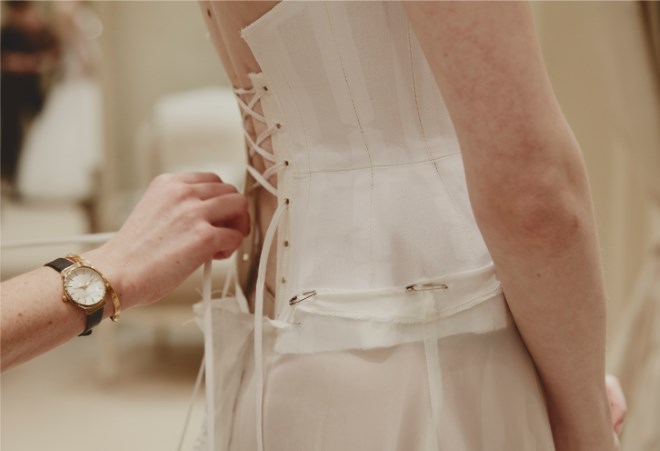 Brides comment frequently on just how comfortable the corsets are, becoming an extension of their body. Phillipa explains “We do sitting and movement tests. We want to make sure the corset doesn’t dig in at any point on the body.”

Phillipa Lepley has become known for the impeccable craftsmanship that goes into creating couture wedding dresses. The signature hidden corset is a key element of a Phillipa Lepley wedding dress and one that you don’t see from the outside but the quality and skill of which you won’t find at any other wedding dress designer.

Even wedding dresses with the most simple silhouettes, or ones that tightly skim the body can have the corset placed underneath them without restricting the fluidity of the design. Phillipa Lepley is constantly inspired by the female form and balance and proportion remain at the core of her wedding dress creations. 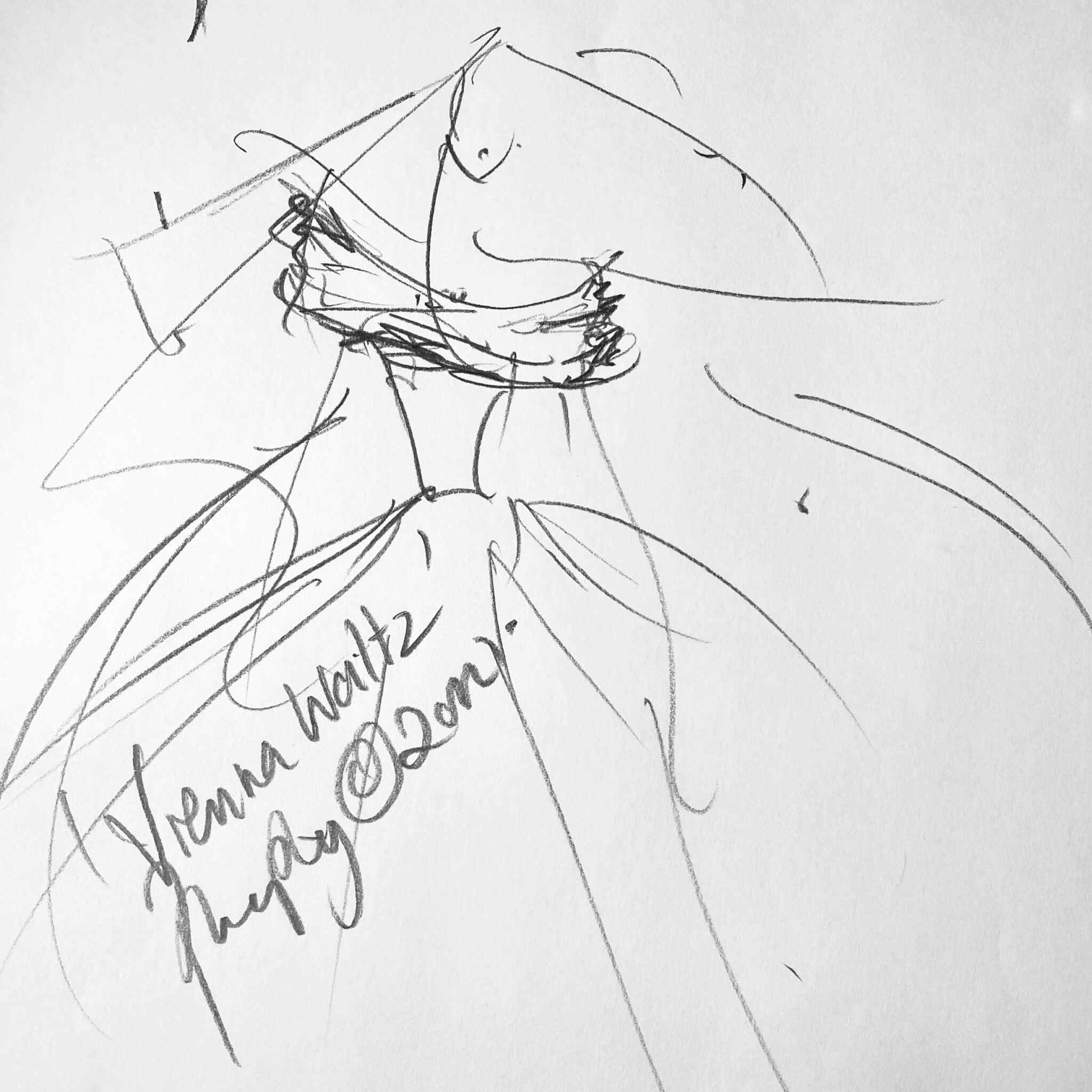 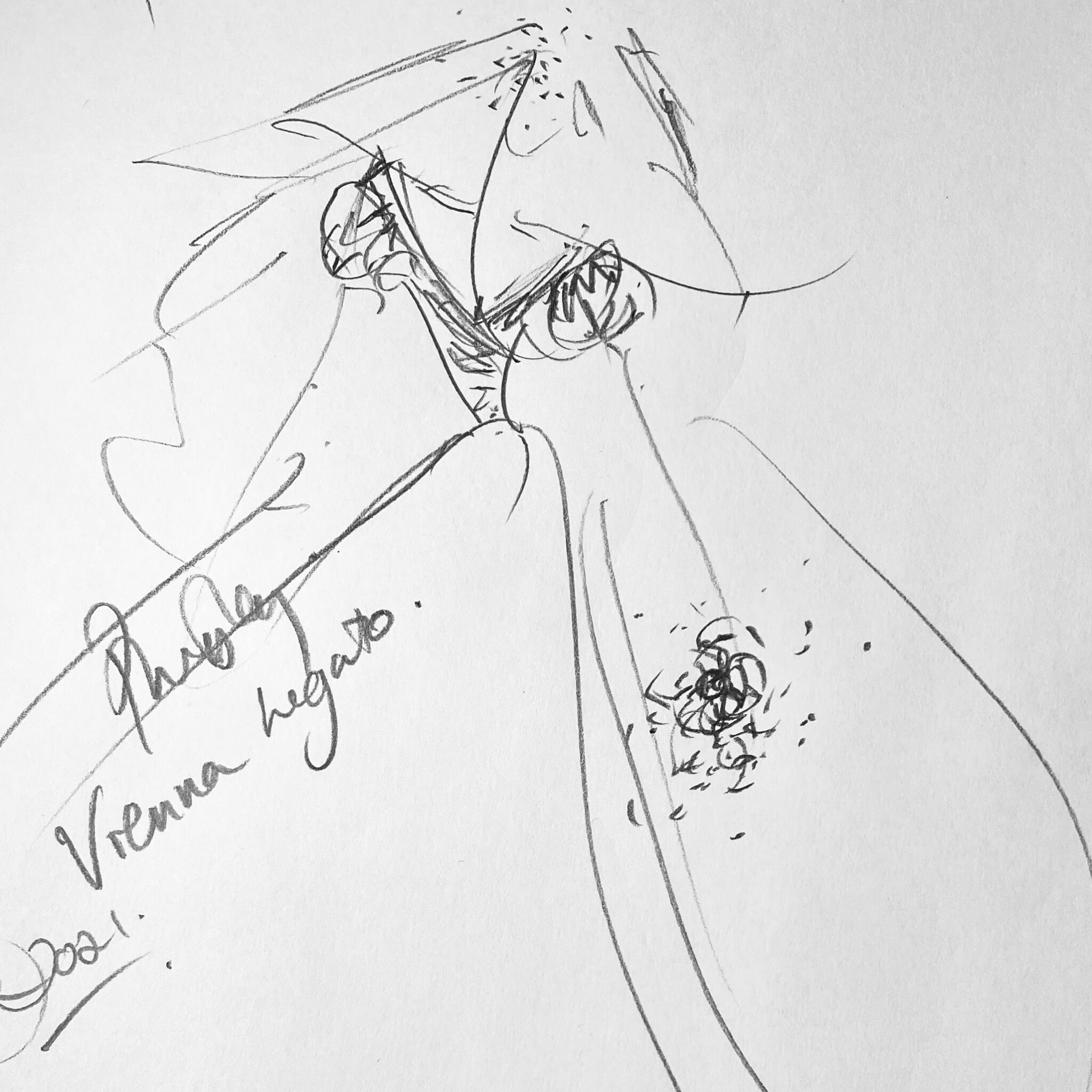 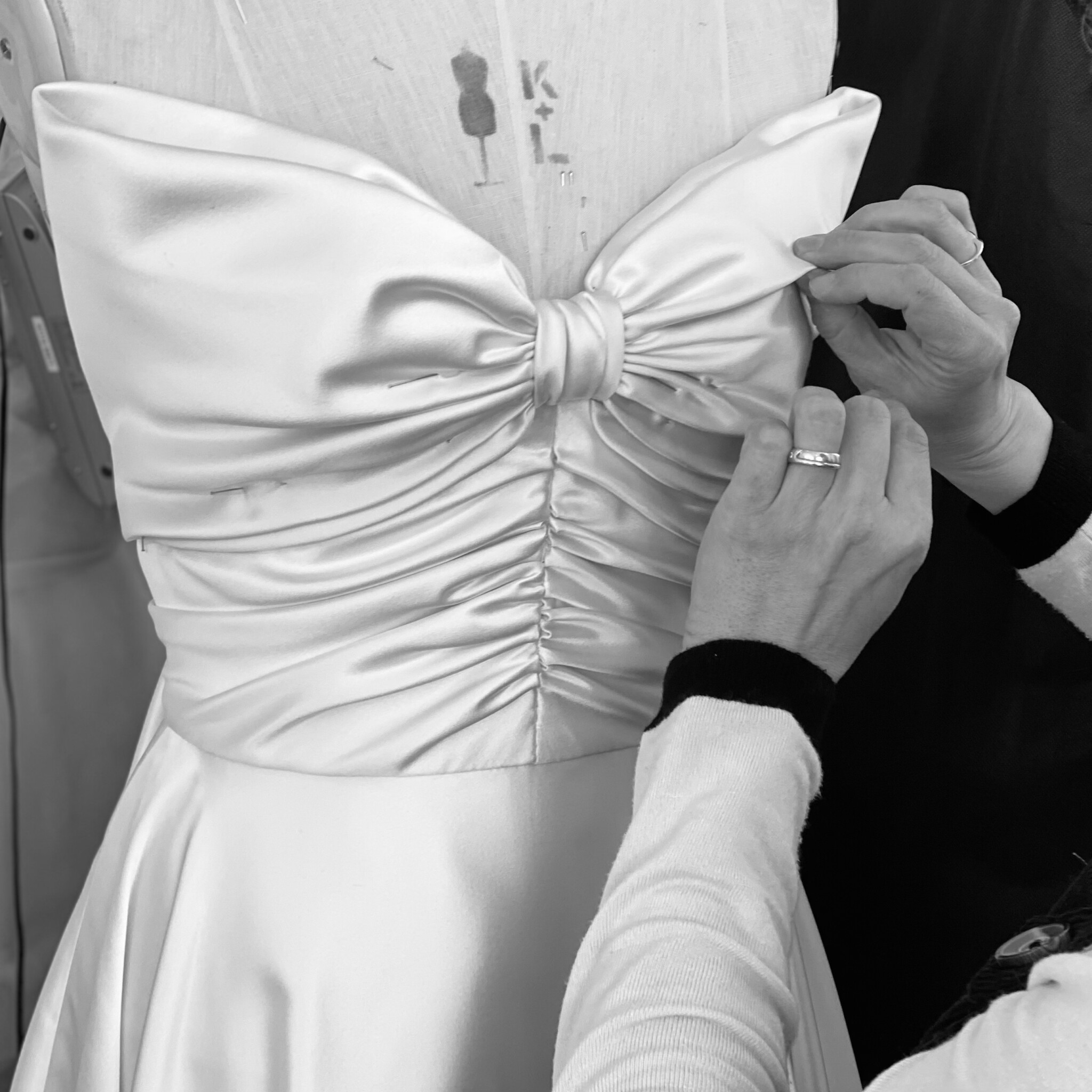 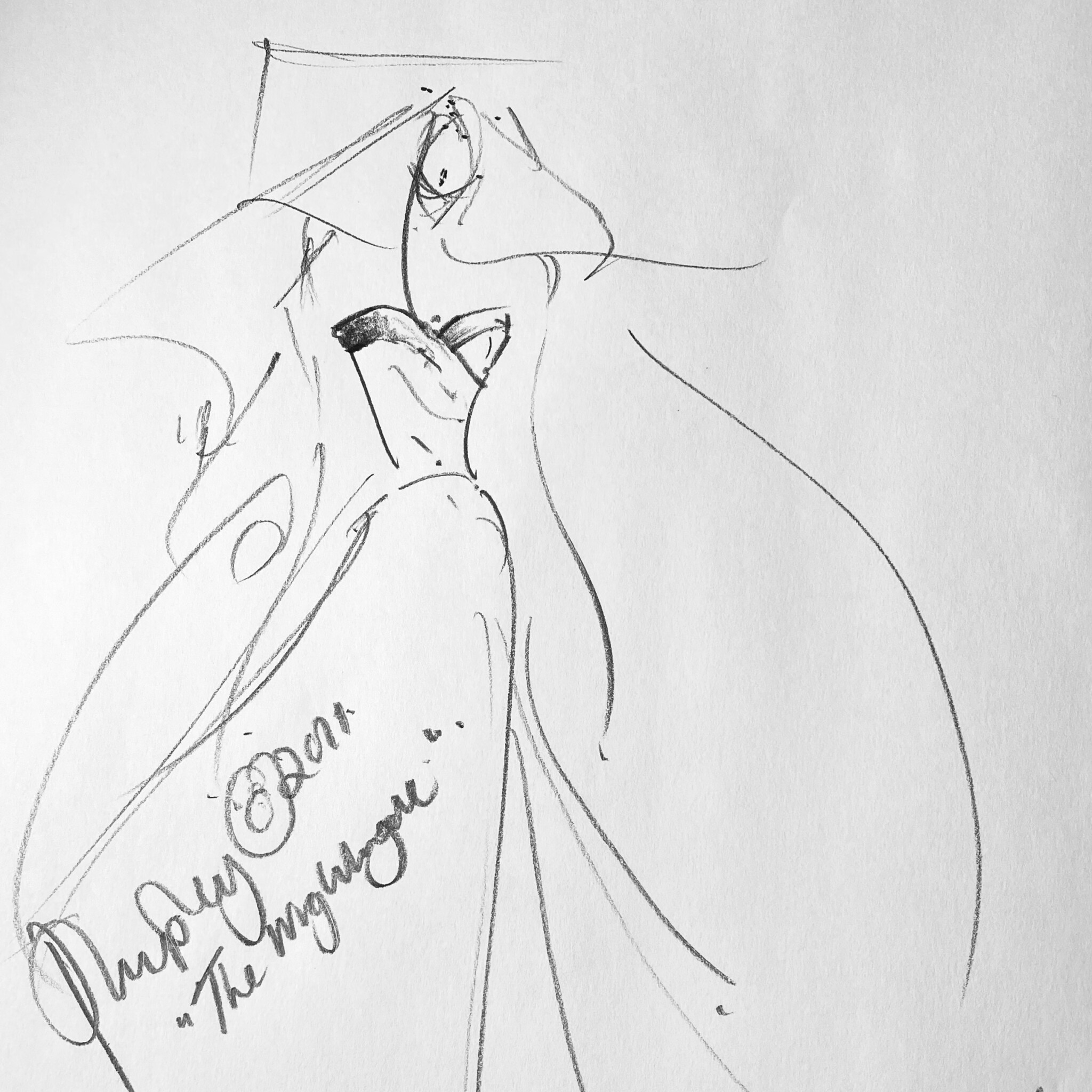 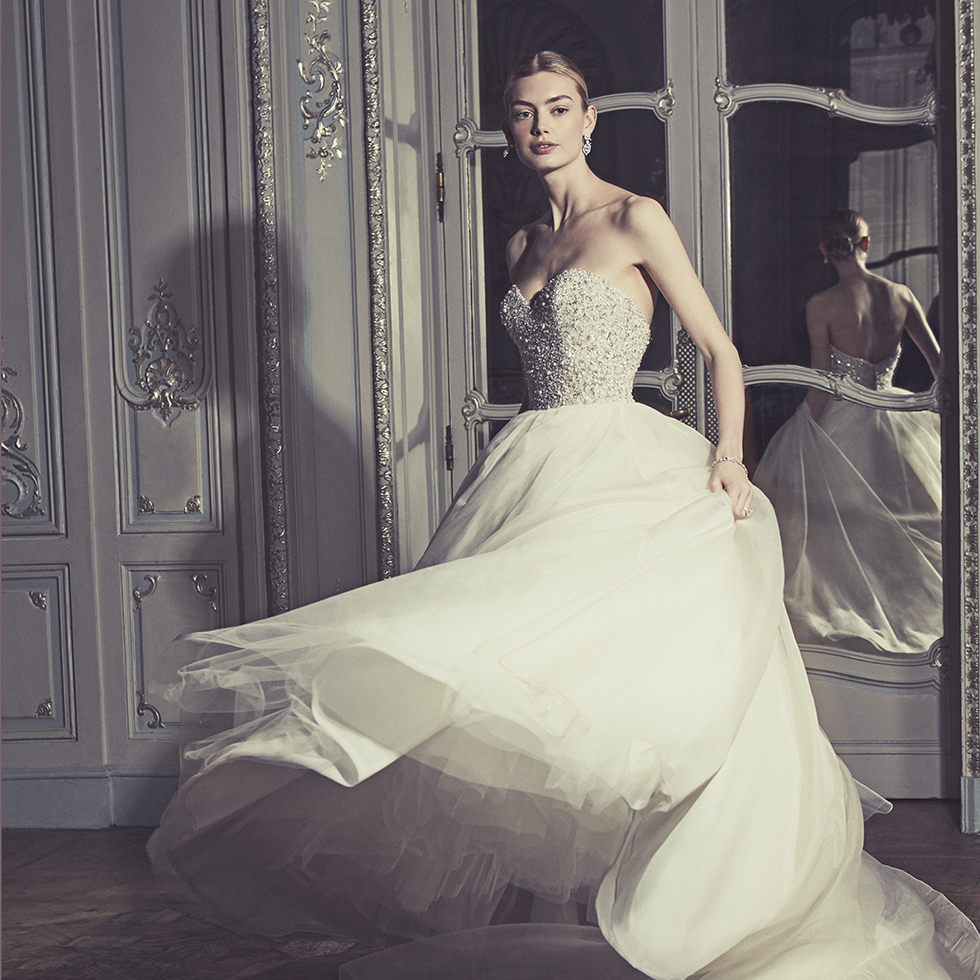